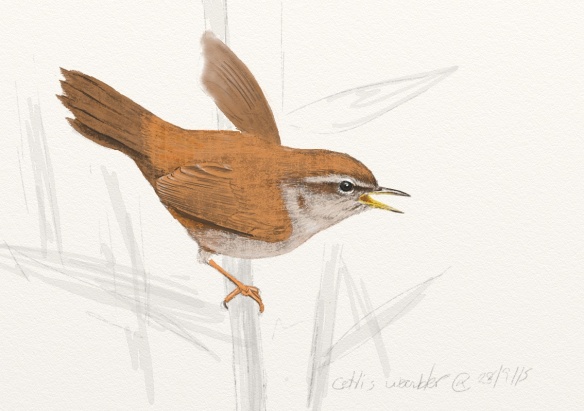 In a trip to a local nature reserve I had the chance to listen to several singing Cetti’s Warblers. Their loud, musical phrase forms part of the soundscape of any river, stream or lake where I grew up in Spain, and as they expand their range, I hope it would become a familiar song too in the UK. This is a bird of tangled marginal vegetation be it reeds or brambles, and they don’t like exposed places, so it is tricky to see them. At most, I’ve have fleeting glimpses of them moving about. They have several similarities with wrens:  a rich chestnut brown plumage (but not barred), an often cocked tail posture, a loud sudden musical song that gives them away, more like a staccato, with well separated syllables, than the machine-gun phrase of the Wren (but I’ve heard the Cetti’s sing in response to a Wren!). In a few videos you can see individuals facing each other interacting, by a mesmerising slow wing flapping, alternating one wing, song, and the other wing. It’s unclear to me if it involves two males on their territory boundary or a courtship display, but decided to use this behaviour in my sketch.