Many sea birds expose the inside of their mouth in their courtship displays. The Gannet’s mouth is surprisingly black, the Kittiwake’s carmine red, while the Shag’s is yellow, with intense yellow spots on their jaws contrasting with their black, iridescent and scaly green feathers. Add to this the odd tuft of feathers that they can raise or flatten at will and their bottle-green eyes and they may look either elegant or truly comical, but decidedly reptilian. I was inspired to draw these Shags after reading Adam Nicholson’s ‘The Seabird Cry, which I recommend, with beautiful and simple illustrations by Kate Boxer. I took many photos of shags in the Farne Islands a few years ago, some of an incubating individual, panting in the sun, very close to us. Pencil, watercolour and ink on my Wacom tablet.

I went to see the Little Tern colony at Beacon Ponds, near Spurn Head on Monday, a very warm, sunny day. The Little Terns fished back and forth from the sea and the lagoon to the shingle beach where they nest, sometimes hovering for a while before diving head first. Some were sitting on nests. At one point, something spook them and they all took flight in a compact flock and circled around before settling again. A pencil and watercolour sketch. 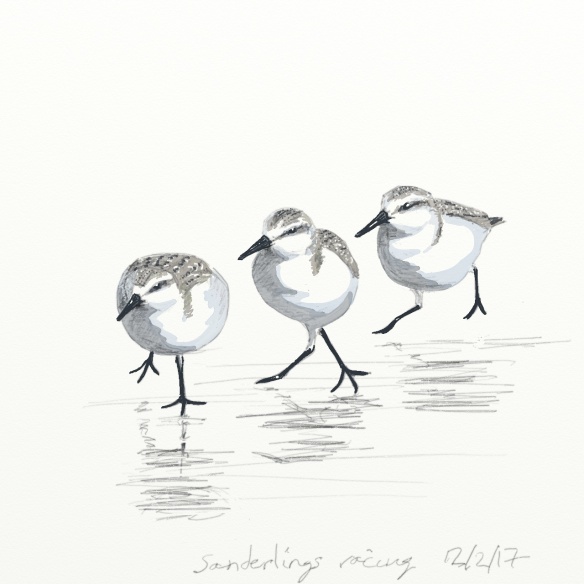 On Monday, in a trip to the Flamborough Headland, I watched my first Little Auks. They are small, but solid little birds which breed in the High Arctic and winter in the North Sea. There were five of them, swimming into a south facing bay sheltered from the northerly wind and cold showers. I drew them in my Wacom tablet using pencil and watercolour and a simple two colour palette.

Fulmars are fascinating birds. Unlike other cliff nesting seabirds, they can be seen on the cliffs for most of the year. They leave the cliffs in September, after their single chick fledges, but they are quickly to return, often in December, where they might visit their nest site intermitently. Fulmars are long lived and form social ties with a partner for most of their lives. They return every year to same nest sites and can often be individually recognised by their bill markings. A couple of weeks ago I visited South Landing, a beach at the bottom of chalk cliffs in the Flamborough Headland. A loud staccato noise attracted my attention. Two Fulmars, presumably a pair, were sat on a cliff ledge, excitedly chattering, facing each other, bills open, calling. They settled, chests almost touching, and watched, moving their heads from one side to the other at the same time, as another Fulmar flew round and round near the cliffs. Fulmars often fly like this, an effortless glide by their nesting sites, whose purpose seems only to fulfill the easiness with which they fly and looks almost like a game, and in any case it seemed to provide entertainment to the onlookers.

I had thought about sketching a Great Auk for a while. The Great Auk, a flightless and much larger relative of the Razorbill which used to live in the North Atlantic has been extinct since the mid 19th century. Stuffed specimens and paintings don’t convey the velvety look of the thick cover of feathers of living auks, which changes with the light from black to chocolate brown. Even the Natural History Museum stuffed specimen is standing on its feet, something auks don’t do, they usually sit with the whole leg in contact with the ground, to balance their body on legs which are positioned at the back of their body to help with swimming. I hope I have succeeded in giving my portrait a more lifelike feel. Pencil on the Bamboo Wacom tablet. 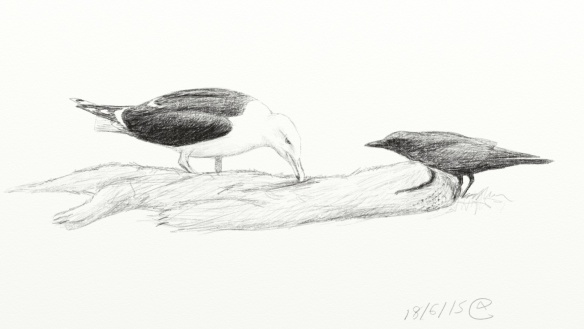 I remembered today one of the best nature spectacles in the UK: the Grey Seal colony at Donna Nook. One of the things that struck me the most was the presence of Great Black-backed gulls feeding on placentas and dead seal pups. Crows were dwarfed by these awesome top predators, but joined in the feast for juicy tidbits.